1080/60p High-Resolution Recording Without a PC!
Easily Save Gameplay Videos in Full HD

GV-HDREC is an HDMI capture device that can easily record HDMI videos without using a PC. It is ideal for recording gameplay by connecting it to a game console. *
It only takes a single device to record, play, and edit videos and mix the microphone. It is also great for those who want to take their first step in recording live play, as it can show live games by simply connecting it between a game console and TV.

*With the PS4 and PS5, it is necessary to deselect Settings → System → Enable HDCP. No need for a PC! Easily record gameplay video in full HD.

Simply hook up the device between the game console and TV with an HDMI cable! Anyone can easily record in full HD.

Anyone can easily record full HD videos and stills by just connecting the device between the game console and TV with an HDMI cable. Since it does not require a PC, you can record and playback gameplay just as you would on a home TV or recorder.

Just hook it up between a game console and TV without using a PC!

The device is recommended for those particular about image quality as it supports 1080/60p recording. Since it offers five recording quality levels, choose the level you want according to the storage capacity on your device or when you want to upload the recording on a video sharing site. 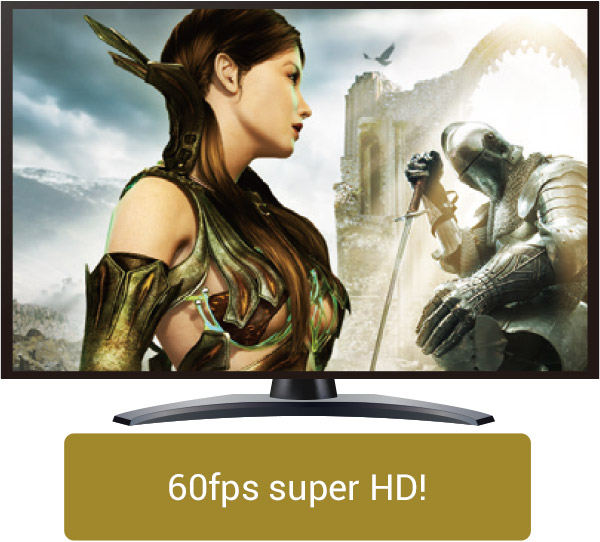 Recommended for those who want to store gameplay, giving top priority to image quality! Since it will use a lot of space, please use a large capacity USB hard disk drive for recording.

The device is for those who want to balance storing gameplay in high definition and having enough storage space.

This is enough if you are playing a game with less intense movement!

Recommended for uploading content to video sharing sites smoothly. The capacity is small, but it offers sufficient image quality for copying to a smartphone or tablet.

It only takes this single device to playback and edit recorded videos!

Check a recorded video immediately, even while playing a game! Press the button to switch to "Playback" mode.

It only takes a press of a button to switch between recording and playback modes. Therefore, you can use the device on a big TV screen to play games and watch recorded videos, too.
Since you can also pause the game and playback the recorded scene immediately, it is easy to address any concerns you might have, such as checking how you have operated the game or see if the video was recorded properly.

Playback at double-speed or in slow motion! Playback from 120x to 1/4x speed.

See a slideshow of recorded video or captured stills.

Use the slideshow function to playback recorded videos and stills of your favorite scenes in order. It is useful when you want to watch the trajectory of the gameplay in sequence.

Edit videos without a PC

Recorded videos can be edited with the touch of a button on the device. You can freely cut unnecessary scenes. 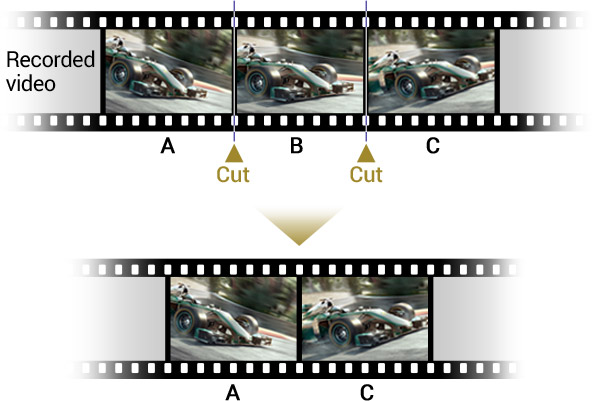 Up to eight recorded files can be merged as one. It is handy when you want to merge several days' worth of gameplay videos as one. 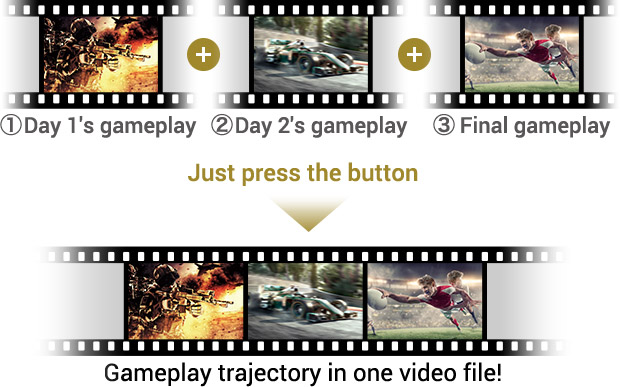 The HDMI pass-through feature lets you enjoy games without worrying about delays.

No bothersome lag between the controller operation and display! Choose from three pass-through stages.

Choose from three stages of pass-through ON/OFF from the menu. Since the pass-through mode lets you play and record games without the bothersome display delays, you can comfortably play even the most challenging, time-sensitive games.

Each mode is described below. *The default setting is

OSD can be hidden when the HDMI pass-through feature is turned OFF.

The on-screen display indicating the remaining recording time and status can be hidden by pressing the Select button when the HDMI pass-through feature is turned off. It is useful when you want to focus on playing games.

The OSD will not be displayed when the device set to HDMI pass-through. 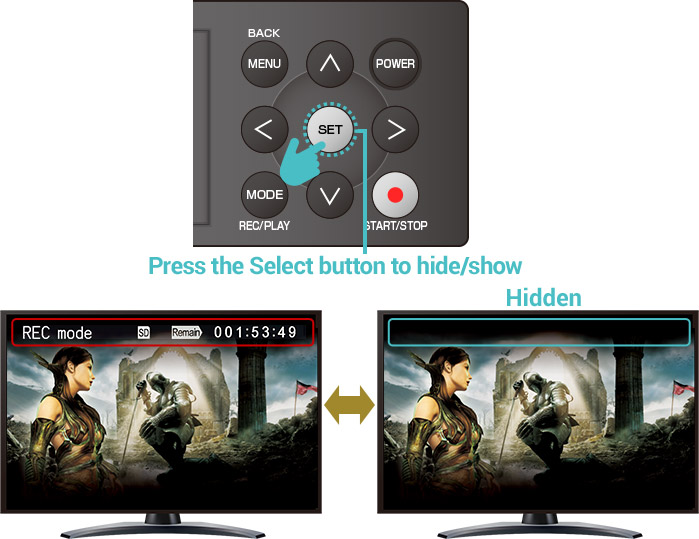 As the device can capture still images of recorded games, you can easily save decisive moments.

Still images of games can be easily captured with the touch of a button. Effortlessly save decisive moments such as your highest scores, full-length portrait of your character, and favorite scenes. 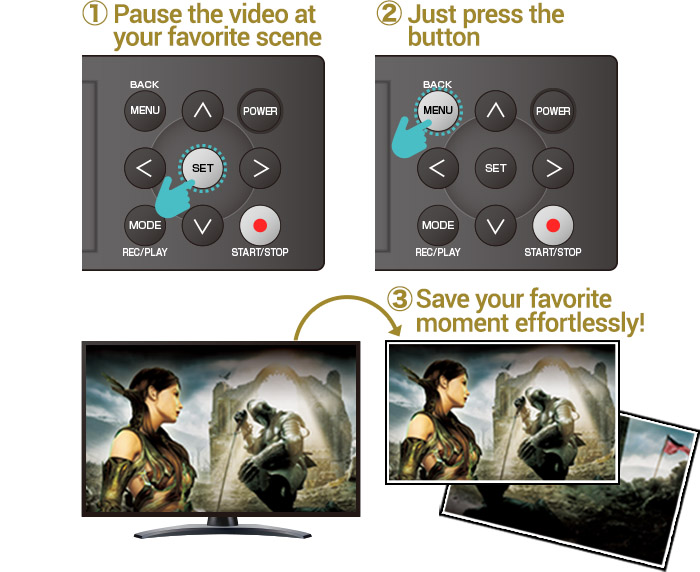 Use it to figure out your battle game attack strategies! Forward the video frame by frame.

Use the frame forward and backward feature to find decisive moments more precisely. Since frame forward, in particular, lets you check frame by frame, it is useful when you need to study the gameplay in detail. The frame backward goes back in units of 30 frames.

Insert a separately-sold SD card into the device to save game videos. Since it is SDXC-ready, it can save up to 128GB of data on an SD card.

Easy to save on SD cards! Also supports large-capacity SDXC

Use an authentic Apple iPhone card reader (sold separately) to watch on your iPhone immediately.

Videos saved on an SD card can be played back on not just on PCs but also iPhones and iPads by using an authentic Apple iPhone card reader (sold separately).
It lets you check your favorite games thoroughly in your hands, expanding the way you enjoy the games. Because it can be connected to USB hard disk drives (separately sold), you can save lengthy videos.

Perfect for those who want to get into play-by-play! It supports live game recording with the microphone mixing feature.

Not only can it record gameplay videos, but it can also record your voice simultaneously by connecting your microphone or headset to the device. It lets you easily create "live videos." 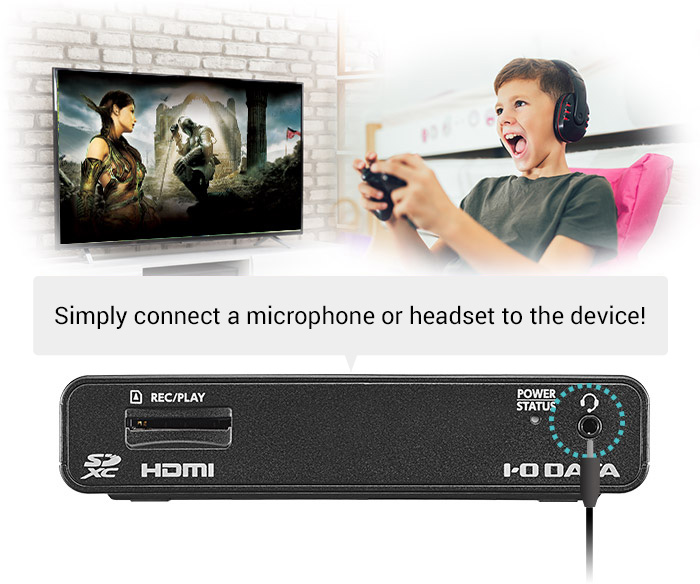 As it supports dubbing, you can record while playing recorded videos.

Use a PC's HDMI terminal to connect and record screens and PC games.

If the PC has an HDMI output terminal, connect the device to record the PC screen and PC games.

Record videos in full HD even with a PC screen!

You can record iPhone, iPad, and iPod Touch screens by using an authentic Apple HDMI adapter (sold separately) for iPhones.
It lets you record smartphone app operations and game app screens easily in high-res without a PC.

Run the device on a portable battery to record on the go!

Use the battery cable provided to operate the device on a portable battery!

Use a portable battery to operate it on the go!

The Game Capture Device can be used in two separate modes

Use it to record or stream

This game capture device can be used in two ways: "Normal Mode" for recording and "USB Mode (UVC)" for streaming. Depending on the mode, it can record video on the PC to an SD card or hard disk drive or import video files to a PC.

How to switch modes

How to switch modes

To switch the mode, turn on the power while pressing the mode button.

Choose the mode on the screen 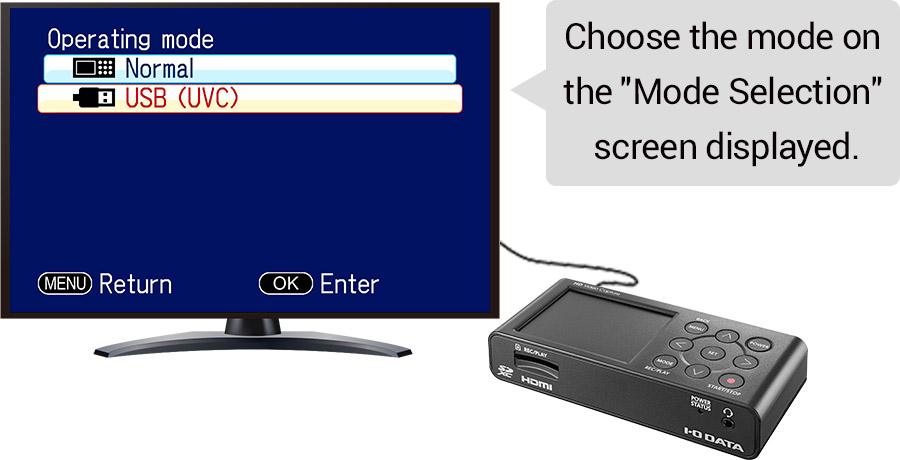 When the mode selection screen appears, as shown below, choose the mode you want.

With the USB mode (UVC), you can record and stream videos on your PC.

Simply connect the device with a PC using a USB cable! The PC will recognize it as a web camera

Simply connect the device to your PC using the USB cable provided to import HDMI videos to your PC.

When the device is switched to playback mode while still connected to a PC in a USB mode (UVC), videos and stills recorded on SD cards can be played back.

See a list of contents saved on SD cards to playback

About copyrights and other precautions

*The product image is for reference only and may vary in reality.

*Supported OS, specifications, and operating environment are subject to change without notice.

* This cable is used to run the unit on a mobile battery.

We use cookies on our website to give you the most relevant experience by remembering your preferences and repeat visits. By clicking “Accept All”, you consent to the use of ALL the cookies. However, you may visit "Cookie Settings" to provide a controlled consent.
Cookie SettingsAccept All
Manage consent

This website uses cookies to improve your experience while you navigate through the website. Out of these, the cookies that are categorized as necessary are stored on your browser as they are essential for the working of basic functionalities of the website. We also use third-party cookies that help us analyze and understand how you use this website. These cookies will be stored in your browser only with your consent. You also have the option to opt-out of these cookies. But opting out of some of these cookies may affect your browsing experience.
Necessary Always Enabled
Necessary cookies are absolutely essential for the website to function properly. These cookies ensure basic functionalities and security features of the website, anonymously.
Functional
Functional cookies help to perform certain functionalities like sharing the content of the website on social media platforms, collect feedbacks, and other third-party features.
Performance
Performance cookies are used to understand and analyze the key performance indexes of the website which helps in delivering a better user experience for the visitors.
Analytics
Analytical cookies are used to understand how visitors interact with the website. These cookies help provide information on metrics the number of visitors, bounce rate, traffic source, etc.
Advertisement
Advertisement cookies are used to provide visitors with relevant ads and marketing campaigns. These cookies track visitors across websites and collect information to provide customized ads.
Others
Other uncategorized cookies are those that are being analyzed and have not been classified into a category as yet.
SAVE & ACCEPT